She only had one chance to get this right.  It was her shot at the big time, and she didn’t want to blow it.

After what felt like eons, she was finally her own boss…had her own company with her one big shot at the big time. And, she had connections… Boy, did she.  She’d been in the business for a LONG time, just at the beck and call of others…always someone else taking the risks…Someone else’s reputation on the line.

But now, it all came down to her. Her vision. Her dreams.  Her plans.

She was scared, nervous, excited. Her emotions were all tangled up in a web of hope and desire and passion.  She’d seen plenty of others just like herself try and fall flat on their faces.  Like, pancake on the asphalt flat. It was terrifying.

Yet, she was tired of taking the backseat.  Tired of living someone else’s dream.  It was time to break out.  Time to do or die.  Time to fight or run. And she was ready.

Oh, her script was good. Riveting, in fact.  She knew it in her heart and felt it in the marrow of her bones. But her infinitesimal budget demanded a search.  A search for an unknown somewhere out in the unknown.

And the turn-out was massive.  It was more than she could handle.  Her staff was exhausted, and so was she.

And then it happened.

She didn’t even have to hear her speak.  It was the way she carried herself.  It was the color she chose to wear.  It was the way her fiery locks draped over her slender shoulder and cascaded down her porcelain skin.  She had found her fabric.

O.K.  All right.  So, I’m not taking about some hot-shot, fantastic, young filmmaker.  (Butcha nevah know…)

It was just me searching for some AWESOME, GRAPHIC,
MODERN-ESK fabric.

And I finally found it. 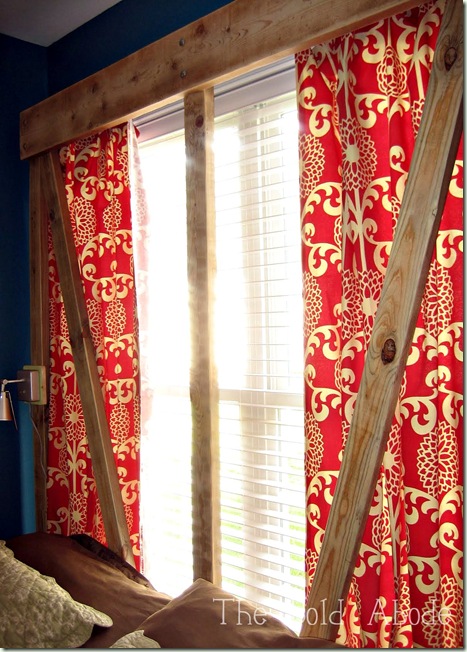 Look at those fiery red locks…
I mean hues.
Doesn’t she shine? 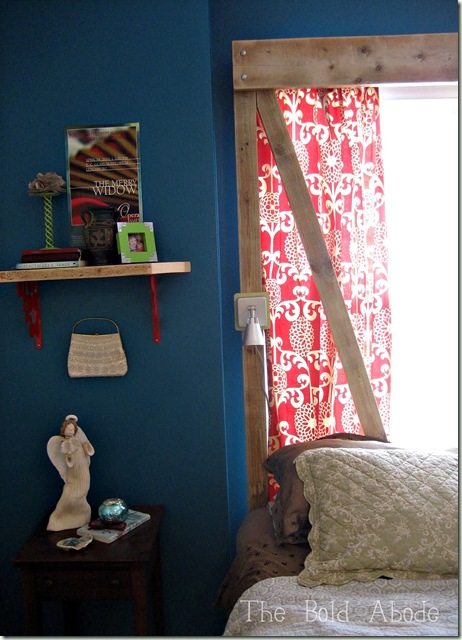 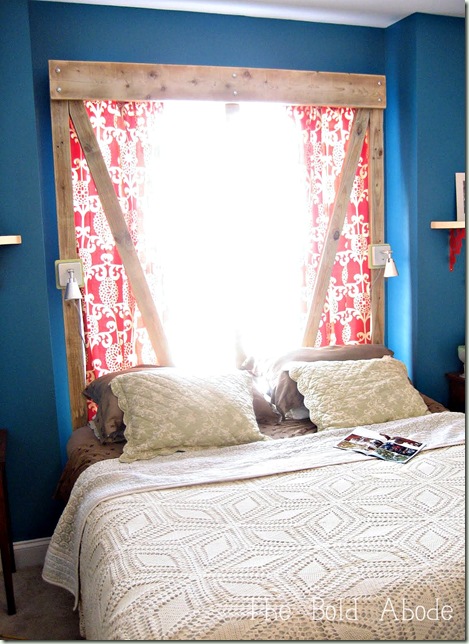 Errr… One thing’s fur certain…the sun sure is shinin’…

“But wait, Gwen! What the heck kinda Headboard is that?  Is that a Reclaimed Truss?!” you ask…

Well, yes, it is a Reclaimed Truss…

“How did you do that?” you inquire.

Well, take a moment and read The Giant Red Steed and the Headboard.

Sooo… what’s the verdict?  I guess I can at least say I’ve NEVER seen anything like this anywhere in the entire universe before… But that’s sorta my goal.

Do you have a crazy headboard?
Update:  Sadly {or not so} This headboard has been replaced…  Check the new and improved one out!