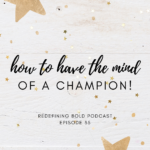 Here’s a quick look at this episode:

What does it take to be a champion? And how can we apply that to our own lives?

In this episode I’m talking about just that, and how to use this simple technique to dramatically change your life.

Well hello there! Welcome back to the redefining Bold podcast. You're listening to episode number 35 and I'm your host Gwen Whitfield from theboldabode.com, where I help warm-hearted women take small steps toward positive lasting change!

What a weekend you guys. My son Brendan, is the 2021 VA state champion in the 100 Backstroke. He also took the silver in the 50 Free and 100 Butterfly.

Now, this isn’t high school swimming. He actually didn’t get to compete in VHSL because our county was in the red zone for Covid.

He was totally bummed about it because he LOVEs high school swimming. It’s so much fun. the bus rides and the away meets. Everything is so different this year and it was tough on him and the other athletes.

So, when he realized he probably would have won both of his events, he came to me and expressed how down he was about it. (which as a parent, I say that’s a huge win that’s he’s being open with me about his feelings, particularly because he's a 16-year-old boy) my only real advice other than empathizing with him because yes it totally sucks, was to put everything he had into this week’s Virginia Swimming Senior Championships.

I don't wanna bore you to death, but I do want to give you a little bit of perspective on this. Like I said there is high school swimming, and there are six classes in Virginia, and we're class four.

But there's also year-round swimming with USA swimming which is called club swimming. These are the swimmers who swim year-round and compete in swim meets associated with our national swimming organization. He's swims with our local YMCA, and there's also a YMCA organization that has its own regional and national competitions. So we are a part of both at the same time.

Brendan, along with several of this teammates, have YMCA National Times, but those meets were canceled both last year and this year due to you know what.

So, this particular meet was the championship meet for Virginia Swimming. Swimmers of all ages can compete if you have the Senior Champ time standards.

I know this can be really confusing if you're not a swimmer. Or swim parent.

But basically this is I really big meet for our senior age swimmers generally 15 to 18, but occasionally there is a college age swimmer in the mix. Which actually happened this weekend.

And Brendan did exactly what I told him to do, he put everything he had into it and he excelled beyond my wildest imagination.

I’m not telling you this to brag, but I am in credibly proud of him.

He achieved one junior national Time cut in the hundred back, (Jr Nationals, which happens in the summer, and in a 50 meter pool (aka olympic size pool) but probably not this summer.. anyway, It’s is the top USA swim meet for 18 and under) and Winter junior national time cuts in the
hundred fly and 200 back. Winter Jr. National's is for what we call short course, which is usually a 25 Yard pool).

He was .01 off of the winter Junior national cut in the 50 Freestyle. So close!

So that is mind blowing and astounding to me as his parent and a non athlete.

Again, I’m not trying to brag… what I really wanted to talk to you today is something that I took away from this experience. And it has nothing to do with how well he did, how fast he swam, or how humble he was about it.

Really surprised me the most is that on Monday when we got home and we're getting back into our normal lives, and our Coach has given these kids in the national team a day off of swim practice, what does BRENDAN do.

Brendan gets up and goes and lifts weights with his friend.

That gave me a little insight into the mind of a champion. First hand. On Monday I was exhausted, I was mentally worn out ,I was physically drained.

And I didn't step my pinkie toe into a swimming pool.

I spent all day on Monday just recovering. Just chilling out. And yet here is my son going to work out.

And to him it was just no big deal. It was what he was just doing. Watching him wake up and get back to business, back to the day-to-day grind of training. It was something that I don't think I have ever experienced, but some thing that I would like to have for myself.

Now, also want to tell you that there is a caveat. I'm an Enneagram nine in Enneagram nine's require a lot of downtime, a lot of rest and I have finally begun to knowledge that and to honor that. So I just wanted to preface what I'm about to say with that information. Never heard of the Enneagram, I will leave a link in the show notes for you to check out.

So I thought what does that mean for me, what does that look like for me . In my life. And I realized that there was one area I could apply it to. And it has nothing to do with achieving anything, really, or accomplishing anything. It's something much more simple. And I had to do with my eating habits.

All weekend we enjoyed eating at restaurants around Richmond Virginia, trying out new dishes and really enjoying the opportunity to relax some of our healthy eating standards. And it was fun, I really enjoy carbohydrates and that's what I indulged in all weekend long.

So as I reflected on this Monday, when I had an English muffin, I had a donut that was left over, I had some chicken and rice that was in the fridge. And about 9 o'clock at night I went to the bathroom, after really thinking about this idea of what a champion does. I gave myself the biggest peptalk I've ever given myself.

I think I spent five minutes looking at myself in the mirror, telling myself why I needed to do this, how good it would feel to get right back to my healthy eating habits, how I would support myself, that I would be there for myself when it got tough. That my body was going to be craving sugar and carbohydrates, but that I could manage my way through it. I looked at myself as if I were talking to my very best friend in the entire world, and promised myself that I would be be there if anything popped up or if I struggled in anyway. It was intense.
I've talked about doing this before on the podcast, but I've never done it to this extent.

And it worked. It was truly encouraging. And I woke up with no cravings of carbohydrates or sugar at all. I had eggs and grilled vegetables for breakfast for lunch I made a big salad with grilled chicken and olive oil as my dressing. And some boiled eggs.

It was as if someone had cast a spell over my body and my mind and disappeared all the cravings that I had felt washing over me all day on Monday.

There is nothing in life, nothing, I am absolutely convinced, there is nothing that we cannot do if our mental game is on point. There is no action we take that doesn't come down to what we are telling ourselves in our heads.

As the multibillion dollar footwear giant says, just do it.

But when I say just do it, I don't mean take action, I mean protect your thoughts ferociously. Because that is what will spur you to action.

I hope that when you are done listening, you'll find yourself looking in a mirror, and inspiring yourself in a way that you never have before.

Because you can listen to a zillion podcasts, you can read the books, you can watch inspiring documentaries, but when you do this for yourself, that's when your life will change.

Thanks so much for listening and I'll see you in the next episode.

Scroll back to top

Enter your name and email address below and I'll send you periodic updates about the podcast.

“I love Gwen and the Redefining Bold Podcast!” <– If that sounds like you, please consider rating and reviewing my show! This helps me support more people — just like you — move toward the home and life that they desire. Click here, scroll to the bottom, tap to rate with five stars, and select “Write a Review.” Then be sure to let me know what you loved most about the episode!

Also, if you haven’t done so already, subscribe to the podcast. I’m adding new episodes to the feed all the time, and, if you’re not subscribed, there’s a good chance you’ll miss out. Subscribe now! 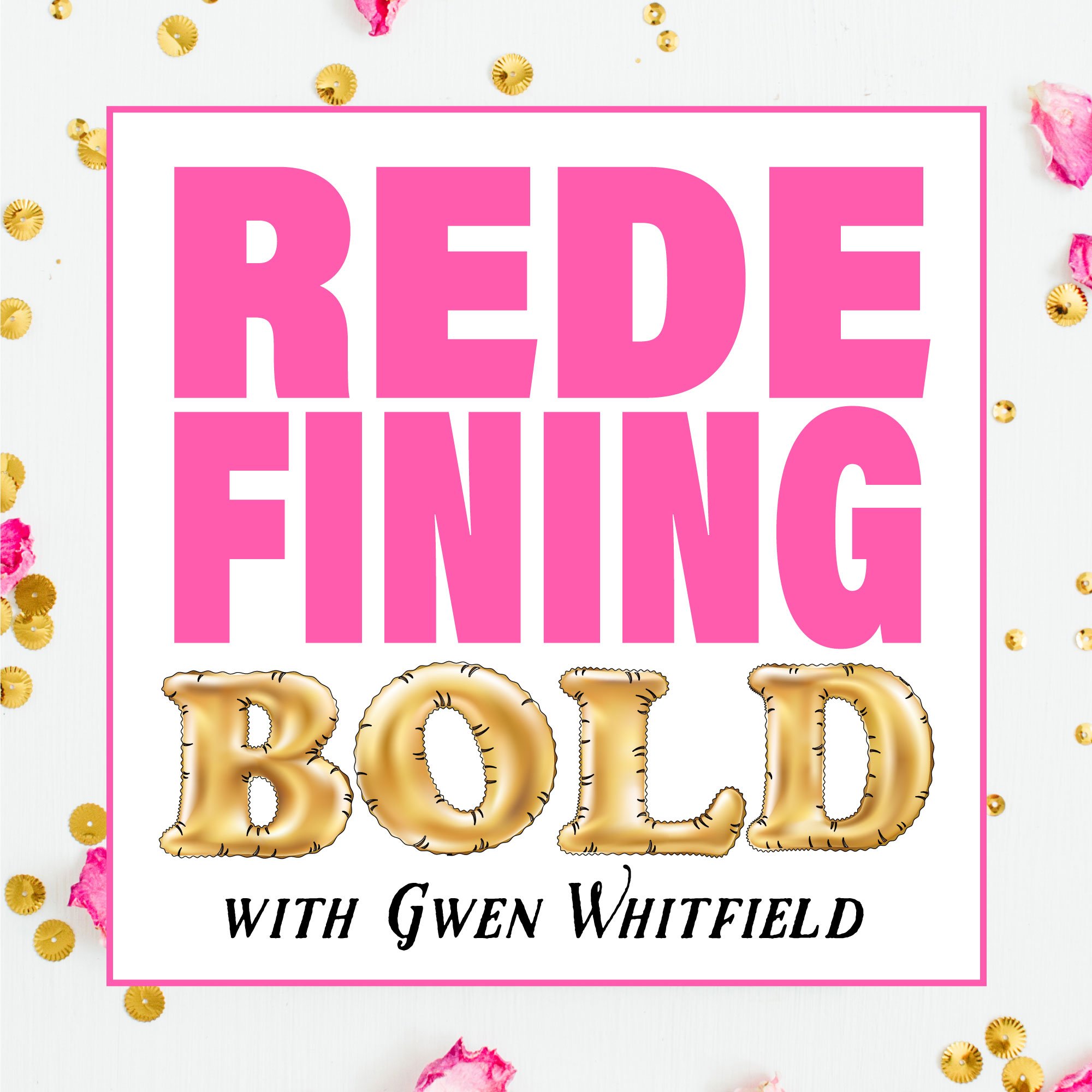